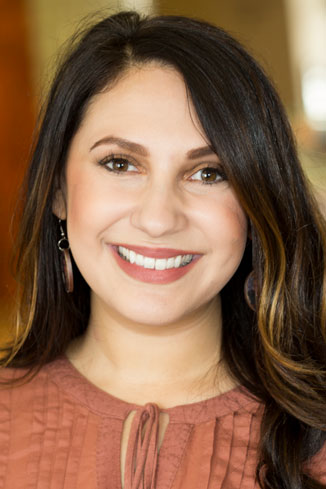 Call her an advocate for social justice.

Chelsea Chavira-Verdin, a former MiraCosta College student who now works as a secretary in the counseling office at the Oceanside Campus, certainly has the credentials. As a student, she served as president of the Gay Straight Alliance, now called the Gender Sexuality Alliance, and was instrumental in establishing an endowed LGBTQIA+ scholarship. For the past year or so she’s volunteered as a certified advocate for victims of domestic violence and sexual assault with the Women’s Resource Center, responding to hospitals when there is a reported sexual assault. During her free time, she and her husband, Jordan, have ventured into the desert with Border Angels, a humanitarian group perhaps best known for strategically leaving behind water bottles accessible to immigrants crossing the U.S./Mexico border. And next fall she hopes to begin her master’s program in marriage and family therapy before launching a new career in working with victims of trauma.

“I like doing what I can for others,” said Chavira-Verdin

Chavira-Verdin herself had to overcome a few challenges to get to where she is now. She earned her bachelor’s degree last spring from Cal State Long Beach as a first-generation college student who was so overwhelmed the first time she enrolled at MiraCosta College she ended up not completing the semester.

“I wanted to go to college; I was the first in my family, so I had no idea how to get there or what I needed to do. MiraCosta was an obvious choice, but I was so lost I didn’t even know what questions to ask.”

Instead, Chavira-Verdin mixed work with travel and ended up volunteering for a while in the African nation of Cameroon. A few years later she decided to return to MiraCosta. That was in 2012. Chavira-Verdin eased in with just one summer course. She also landed a part-time job in the Admissions & Records office as a student worker, which played a pivotal role in her transformation as a student.

“Admissions and Records was like family,” Chavira-Verdin said. “I learned so much from the department and staff, including seeing a counselor and developing an education plan is important if you’re going to graduate.”

By the time fall rolled around, Chavira-Verdin was a full-time student immersed in campus life. It was while writing a paper on the LGBTQIA+ community for a sociology course that Chavira-Verdin became involved with the Gender Sexuality Alliance. Before too long she was president of the campus organization, planning fundraising events such as the Queer Cupcake Party to raise money for a newly endowed, LGBTQIA+ scholarship, putting together a Coming Out forum, and establishing a designated safe space that is available to LGBTQIA+ students.

Chavira-Verdin, now 28, earned her associate degree in the spring of 2014 and continued working in the Admissions & Records office while commuting to Cal State Long Beach twice each week for her bachelor’s degree in English with an emphasis in Creative Writing and a minor in Women’s, Gender, and Sexuality Studies; she graduated in May 2017. She and her husband, Jordan Verdin married two months later. She’s currently working in the MiraCosta College counseling office and applying for a master’s program at San Diego State University at the end of the year.