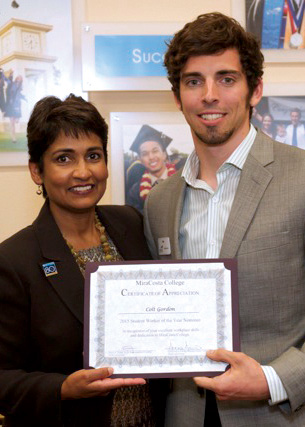 A Marine Corps veteran who served in Iraq, Gordon enrolled at MiraCosta College in 2014 after undergoing therapy for a longstanding eating disorder that at one point led to thoughts of suicide. Now he’s shining at UCLA, where Gordon is studying psychology with plans to earn a master of social work and dedicate his career to helping youth, addicts and people struggling with mental illness.

“I couldn’t have made it to UCLA without MiraCosta,” Gordon said. “Everybody is there to help you get to wherever it is you want to go.”

Gordon’s odyssey began after graduating from high school in his hometown of Seattle and enlisting in the Marine Corps. A crew chief in an assault amphibious vehicle, Gordon was based in Okinawa and Twentynine Palms and deployed to Iraq with an infantry unit for much of 2008 and 2009. Uncertain of his goals upon leaving the Corps, Gordon settled in San Diego and vacillated between school and work.

All while battling depression stemming from an eating disorder that was masked by his dedication to working out. He ultimately entered the UC San Diego Eating Disorders Center for Treatment and Research where he worked with a psychiatrist, therapist and a dietician, in addition to attending group therapy sessions. Before too long, he was leading the sessions, which led him to crave a career as a therapist.

When his treatment ended, he enrolled at MiraCosta College. “The quality of professors was unparalleled compared to the other community colleges I had been to,” Gordon said. “The services were incredible. But where it really all started was with the counseling office. They helped me develop an education plan and planted the seed that I could not only go to a four-year college or university, but I could go to any four-year college or university. UCLA? It was just a total ‘why not?’ attitude.”

Along the way, he served as an advocate for mental health awareness and was vice president of NAMI on Campus, a group that helps address the mental health needs of students by providing peer support, education and advocacy. In addition, he worked as a mental health peer educator raising awareness about suicide prevention and other mental health topics in the college community through classroom presentations and other events.

His efforts netted him the 2015 Student Employee of the Year award.

“Colt grew immeasurably during his time at MiraCosta,” said Dr. Lynne Miller, who chairs the Anthropology Department. “He was always bright and hardworking, but also became a real classroom leader, always eager to help a fellow student through rough times.  He contributed positively to the Honors Program and took advantage of opportunities to make research presentations at various undergraduate conferences. Now he is thriving at UCLA, one step closer to achieving his dreams. Colt is an inspiring young man and represents the very best of the synergy between MiraCosta College and the dedicated student.”