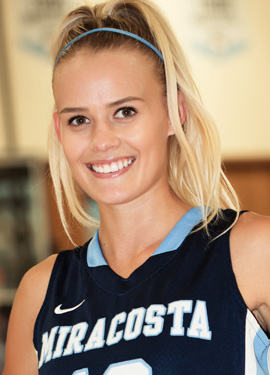 But excelling in the classroom was not always her strength, which hindered her chance of earning an athletic scholarship to a top university straight out of high school.

“I was really good in basketball and thought I would get a scholarship based on my athletic skills alone, but I hurt my ankle really bad during my junior year. Then, I tore my ACL and needed to have surgery which took me out of the game my whole senior year,” said Griffin. “Since I didn’t really focus in school and had really bad grades, I couldn’t get accepted to any four-year universities.”

After graduating from San Clemente High School with no clear path in life, Griffin sought ways to get back in the game and found MiraCosta College, where her former basketball coach, Roger Moses, coaches the women’s basketball team.

“I’ve known Brogan since eighth grade. She was a very good high school player but she had an unfortunate accident, which took her out of the rest of her high school basketball career,” said Moses.

Knowing Griffin’s passion and skills for the game, Moses recruited her to the basketball team.

That was in fall 2013. Today, Griffin has a 4.0 GPA and is majoring in business administration. She hopes to transfer to USC and play for its women’s basketball team.

“My experience at MiraCosta College has been great and I’ve really progressed here,” said Griffin. “It was a good decision that I came to MiraCosta College. My grades have improved tremendously—I love it here.”

Due to her tremendous academic achievement, Moses nominated her for the Academic All-State Award, which honors student-athletes who are the best students in their respective sports. The CCCWBCA (California Community College Women's Basketball Coaches Association)
released the list of recipients in October 2014 and Griffin is the only San Diego community college student who received the prestigious award.

“I was so excited when Coach Moses told me I received an academic all-state award,” Griffin said. “When I saw the recipient list, I was pretty stoked. It’s great to see the kinds of things one can earn with good grades—it is very motivating.”

Griffin is invited to attend an event celebrating all Academic All-State nominees and recipients in spring 2015.