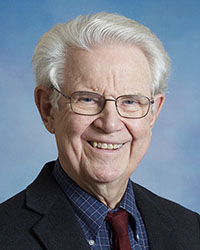 The MiraCosta College Board of Trustees appointed Dr. William C. Fischer as the Area #7 trustee in April 2009.       Dr. Fischer was elected in November 2010 to a four-year term.

Fischer holds a bachelor’s degree in English from Williams College. He served as a lieutenant in the US Navy for three years before earning a doctorate in English from UC Berkeley. Fischer dedicated his professional career to education; for 33 years he taught English at State University of New York at Buffalo. Before retiring as a professor emeritus in 2000, he served for five years as the vice provost for faculty development. Following his retirement, Fischer moved to Oceanside, where he has been involved with the SD County Registrar of Voters and has served on an Oceanside traffic committee.

Dr. Fischer believes "MiraCosta College is extremely important to the educational well-being and cultural richness of North San Diego County”, and is "firmly committed to working hard on making higher education an effective instrument of social stability and economic progress, especially for college students in these troubled times. I believe I can make a productive contribution to the college and the community as a member of the board.”