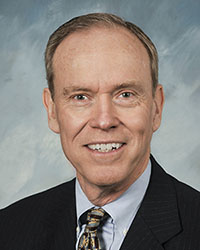 Frank Merchat represents Area 4 in the eastern part of Carlsbad and was appointed to the Board of Trustees in April 2015.

Prior to his appointment, Frank served for five years on the MiraCosta College Foundation Board of Directors. During his time on the foundation board, he had the honor of being a member and chairperson of the development committee, as well as being a member of the finance committee at the time of his appointment as the Area 4 trustee. Upon becoming a member of the Board of Trustees, he had to resign from the foundation board and will miss all of the friends who worked so hard to provide students with the financial resources to make their dream of higher education a reality.

Frank was raised in Los Angeles and went on to attend San Diego State University. He graduated number one in finance in 1977 and started his corporate career in the computer industry. With time spent on the west and east coast, he spent his 20s and early 30s working for IBM as a team leader with some of its largest customers, and as a product marketing consultant on IBM's most profitable product. As his career advanced, he had the opportunity to receive advanced education in business management, communications, and training.

Frank volunteered his time to teach sales skills to groups for minority- and women-owned businesses, as well as being a four-year volunteer for VITA, which assists low-income families in preparing their tax returns.

After working for thirty years in the computer and software industries, Frank pursued his lifelong dream of building his own company. He is currently the founder and managing director of Night Oak LLC, a commercial real estate investment company.

Frank and his wife Jennifer moved to Carlsbad in 1989 and were soon joined by daughters Krista and Katherine, both of whom have MiraCosta College credits to their name.

Frank is honored to represent Area 4 and is passionate about MiraCosta College and its mission to make education affordable to all.